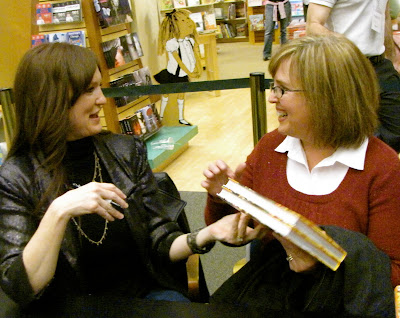 Have you ever heard of Ree Drummond, The Pioneer Woman?
I thought so.
Did you know that I live a parallel life to this woman?
I didn't think so.
It's true.
We have so many similarities, you will be shocked.
We both homeschool.
We both love to cook.
She has cow poop on her porch, I have chicken poop on mine.
We both have mentally handicapped siblings.
We both have red hair. Well, mine is red more often than not.
We both left the 'city' for the 'country'.
We both love Starbucks.
We both have blogs.
I have been doing Ethel Merman imitations since I was 20, and technically, since I'm older than she is, I've been doing them longer.
Our birthdays are both in January. *Mines tomorrow - you still have time to FedEx me gifts*
We've both done big remodels to areas that company comes and stays in. Sure, hers is a little more grand, you know The Lodge....mine is The Squirrel.
I'm going to start giving away weekends to come and stay in The Squirrel.
Ok, so I haven't written a New York Times bestselling cookbook, but give me some time.
Ok, so I haven't toured the country signing that book either....but I'd be happy to meet you anywhere and sign any book that you have.
You know how she did her hotel reviews on her blog? I thought I would do that today. I'll review the last hotel I stayed in. It was a few years ago....2006 I believe. Indianapolis......ahhh....I remember it like it was yesterday.
Aaron and I were taking part in the Indianapolis Wild Zoo Ride. It's an organized bicycle ride that tours the city of Indianapolis. You do a lap around the Indianapolis 500 Speedway, and end up back at the Indianapolis Zoo. We'd planned on doing the 40 mile route.
Thinking I'd make an adventure out of it, we decided to head down to Indianapolis the night before. We loaded up our bikes, our bike shorts and headed out. My sister decided to go along for the ride. Now, ya'll remember that I'm not even sure where I live, let alone where Indianapolis is in relation to where I live? Just so we are straight, I can't find my way out of a paper bag....got it? We headed south on I65, cause that is where Indianapolis is right? Right. I just figured we'd drive down there, find a nice little cheap, clean motel, have a nice little dinner and get a good nights sleep before our ride.
Ahem.
We found Indianapolis. We found a hotel/motel. The Dollar Inn. It was $60 a night, and that is all I felt that I needed to spend for a place to sleep that night. When in the world did it become so expensive to sleep somewhere? I've always camped where ever I went.....even camped for ten days in Florida....so I like think you should spend no more than $20 to sleep somewhere.......
We pulled into to the parking lot...and well, it didn't look TOO good, but I didn't think it could be so bad.
Here's a bit of advice for all you travelers. If there is a sign that says 'No refunds after 15 minutes' hanging in the lobby, and a bullet proof glass that you pay through....you really might want to re-think your choice of accommodations.
We went to the room. Oh. My. Goodness. Gracious. It looked like a scene from CSI Miami. Where was the chalkline of the body? Was that blood on the ceiling? Aaron was freaking out. We locked our bikes to the TV, since it was bolted down. I kept trying to make the best of it, saying...ok, we are just sleeping here......but I realized I wouldn't sleep a wink there. 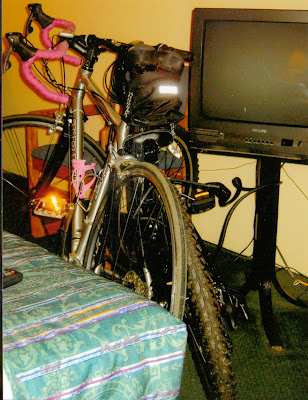 I forgot socks. Did I tell you that? Yep. No socks. You really don't want to ride your bike 40 miles without socks. We ventured out of the hotel looking for a Wal-Mart, or anywhere I could find socks. We decided to grab something to eat while we were out. We picked up some burgers, went back to the hotel, and as we were driving back to the hotel, I announced to my sister and Aaron, that I didn't care that I was losing the money, we weren't staying at this hotel. I said 'Let's get back there, eat, and get the H E double toothpicks outta there'. Never did find socks by the way.
As we were sitting on the beds eating our burgers and fries, we heard a loud muffled sound coming from the parking lot. Now, this is one of those little motel situations where you are parked right in front of your room. So, I look out the window, only to see that the car parked next to mine is now in flames, right in front of our room. Aaron gets hysterical. I asked my sister to go out and move my car, and I calmed Aaron down. I unlocked the bikes, he carried our bags out of the car and we left the now smoke filled room. 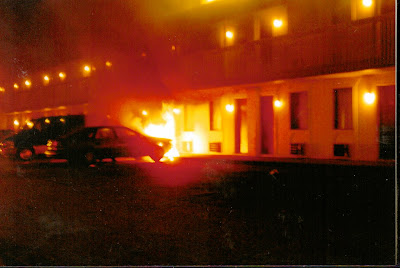 Oh, it gets better.
Now the hotel is on fire. The flames reached the upstairs balcony.
I was sure I could get my money back now, even though it's been more than fifteen minutes! 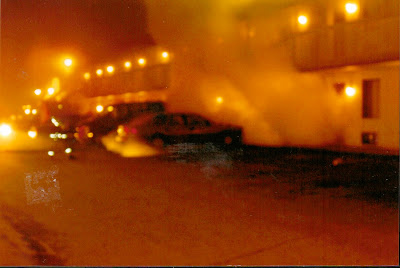 We are completely blocked in the parking lot by police cars and fire trucks.
I began to laugh.
Hysterically.
Tears running down my face, can't breath laughing.
Only me...honest to God, would this happen to.
Finally, things calm down, and I go to the office to get my refund.
There was quite a language barrier, but after some time of refusing another room, saying over and over....I want my money back, I got it.
We then drove around aimlessly in circles looking for another hotel.
About 2am we finally found something that I was willing to pay for ($100 was my limit) and that I felt safe in.
We were at the starting line at 8am, half awake, sickly tired, and sockless.
We opted for the 17 mile route. 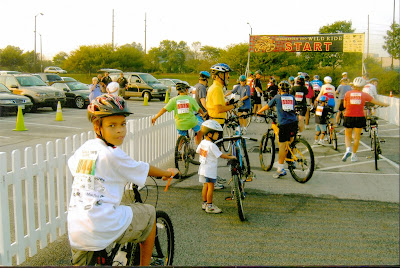 Despite our fatigue, we had a good time, and riding our bikes on the Speedway was super cool. 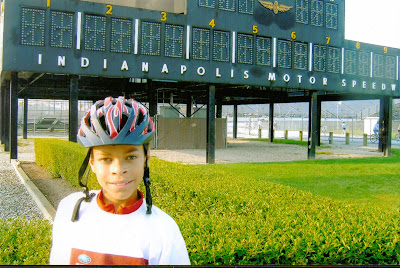 My lessons learned from this fiasco?
Mapquest.com
Hotels.com
Amen.
Posted by Jayme Goffin, The Coop Keeper at 8:15 AM