Tales of Carnage...Tales of Woe 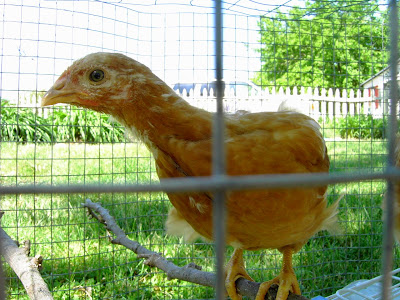 "There's been an accident", she said as I stood on the other end of the phone, bracing myself for the extent of the bad news. I'd assured her when she took the chickens home with her that I would understand if anything happened, because I know, keeping chickens, things happen. I just didn't really think they WOULD happen. Not this time, not to my sweet baby girls.
"Something attacked the cage in the middle of the night. One chicken is missing, another one had her toes chewed off". I gulped. Please God, not little Peggy Sue. Not the one that I'd nurtured. Can't this chick get a break? She continued talking, but I didn't hear her anymore, I just felt numb, and my mind was racing. Could she heal? Would she heal? Would the other chickens welcome her back to the flock? Do I need to fashion a little wagon and pull her around like a Fisher Price toy!? Well, enough talking, thinking and wondering. I drove over to see what I could see. I was REALLY afraid to even look. I don't like carnage. I don't do well with carnage. I can't even look at my own cuts, let alone see one of my birds with no toes.
My friend was so traumatized by the whole thing. She felt incredibly bad, and I just kept trying to reassure her that if she hadn't watched them I'd probably have no hens left. She had two baby chickens herself, and she ended up giving me those. I left with 6, and I was coming home with 6. Well, I came home with 5, because we decided that Stubs (I know, I'm just SO original with animal names) would be better off in ICU at her house. My friend is an animal lover that should have been a vet. She has taken care of Stubs, now called Baby Stubs all week long. I was going to take pics of poor Baby Stubs, but I felt I'd respect her privacy. (That sounds good doesn't it? Truth be told, I never had time to make it back over to take the pics of carnage!) My friend is now going to keep Baby Stubs as her own. I'm happy to tell you that Baby Stubs is doing well. She's healed almost completely, and is able to walk long enough to get up and eat, and drink. She will be well taken care of. I on the other hand, will miss her terribly, and never be able to order Chicken Fingers at a restaurant again. 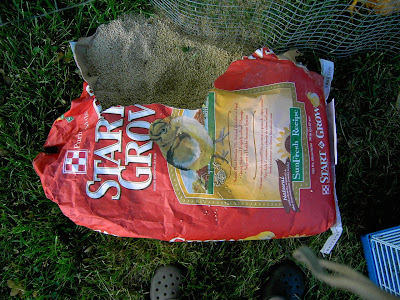 This has just been a week of carnage. Carnage. It's my new favorite word. Carnage abounds here. Take a look at that fifty pound bag of chicken feed. SOMETHING tore it completely open last night and spilled half of it on the ground. It had to be pretty strong. Three layers of heavy paper. I shudder to think what did that, and what it could do to the chickens one night. I keep hearing the music from "Psycho" playing in the background. 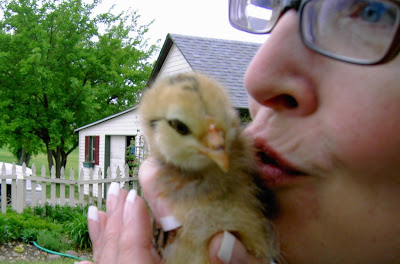 If there's one thing I've learned since I've moved from the big city is to move on. I moved on. I bought two new baby chicks! I swear I could buy a hundred and it wouldn't be enough. If they would just stay little!! 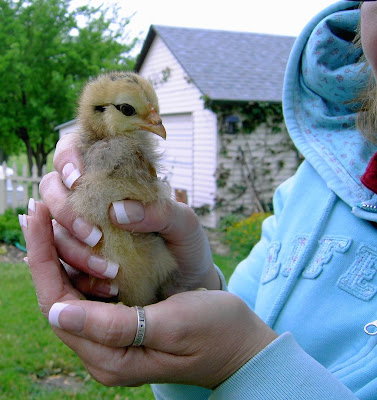 Look at these little cuties! These are the chickens that lay the blue and green eggs. The original breed is called Araucana, but these are like mutts, they will lay the Easter Egg colored eggs, but aren't a true full breed Araucana. Like my $5 manicure? So do I. I just can't type worth a crap. 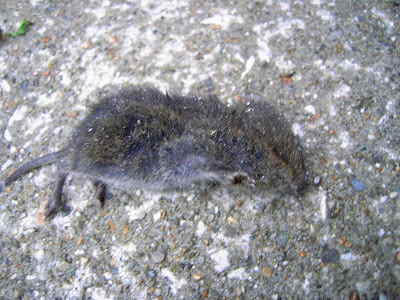 Cue the "Psycho" music again. I'm not kidding you, every morning I wake up to carnage like this. Dead mice. Dead birds. Perhaps the photo below is the most disturbing. Viewer discretion is advised. 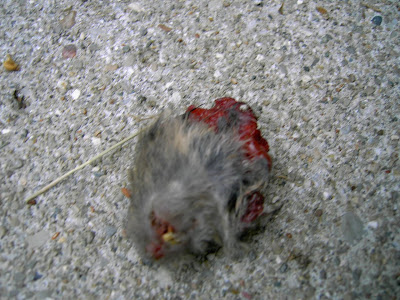 I suppose the heads aren't tasty. I find it disturbing to wake up to a mouse head. Sometimes it's nothing but the mouth, nose and whiskers. See the little teeth still in it's mouth. Yeek! I have the goosebumps. 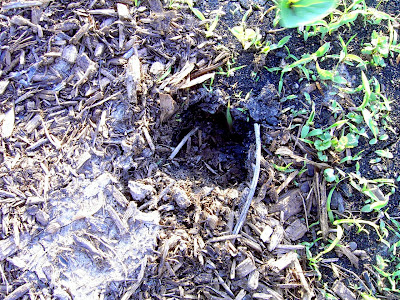 Well, now to the untrained eye, this might look like a hole in the ground. But it's not. It's a deer track. It's about 6 inches away from my corn that is three inches high. It gets better. 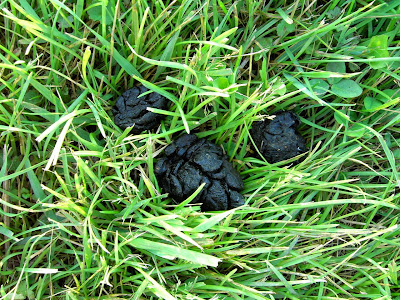 Deer scat. Scat is the official Park Ranger talk for poop. At this point, I feel the deer are taunting me. It's a slap in the face. Oh, but I have plans for them. Evil plans. 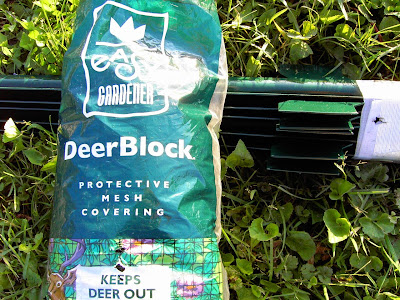 I went out and got this. Hopefully I'll make time to put it all up before they can totally desecrate my garden. I've never had deer troubles before. I'm losing sleep. I'm counting deer, and they are all laughing at me. 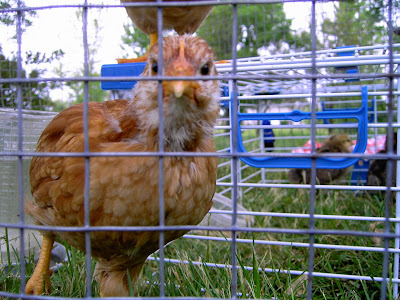 Don't worry little girl. I'll do my best to protect you. 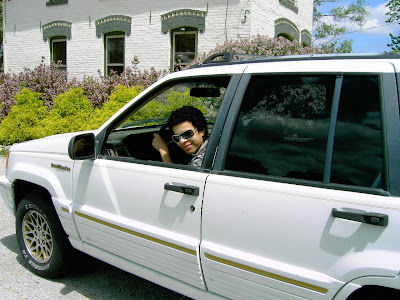 Mouse heads. Mouse guts. Chewed off chicken fingers. Deer scat. This is scarier than them all. Aaron backing up the car in the driveway. Two years, six months and fourteen days til he gets his drivers license. Or at least he thinks so. I work at the License Branch, remember!!! CUE THE "PSYCHO" MUSIC!!!!
Posted by Jayme Goffin, The Coop Keeper at 10:27 PM

Email ThisBlogThis!Share to TwitterShare to FacebookShare to Pinterest
Labels: Confessions and Musings, My Fabulous Chickens