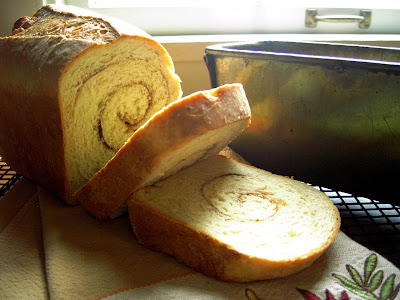 I absolutely love to bake yeast breads. Don't fear the yeast people, it's not that difficult, well, not difficult at all. Sure, you may have some flops, but everyone does. How else can you learn? This is a wonderful recipe. Oh my, so wonderful. The texture, the taste, the homeyness of it all. It's almost too much to bear. I've made this twice now this week, because Aaron can't stay out of it!
If your anything like me, I've not the time to make bread during the day, so what I've been doing, is making the dough, and letting it have it's first rise in the fridge overnight. I like waking up and seeing that big puffed bowl of bread. Then, I form it, let it rise again, and bake it. It's much better time wise for me to break it up like that, and if I'm not mistaken, I do think it improves the texture of the bread.
This is a recipe out of the Amish cookbook I referred to earlier...Cooking from Quilt Country by Marcia Adams. So far there have only been a couple of recipes I've NOT liked from that book.
Still need to tell you how the Amish are responsible, well the Amish and mainly Harrison Ford bear the responsibility of me living where I live. 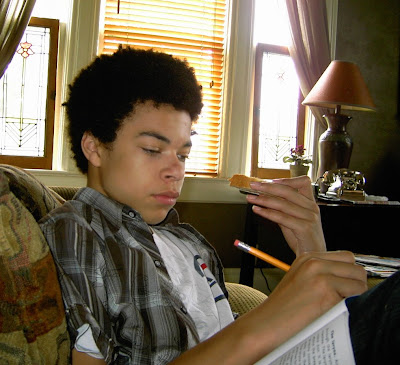 Here's Aaron enjoying a slice of warm Cinnamon Swirl Bread while studying Political Science. You don't get that in a school cafeteria baby!
Enough babbling...here is the recipe:
Cinnamon Swirl Bread
2 cups of milk
2 tablespoons of butter
1 cup warm water
1 packet of active dry yeast
3/4 cup brown sugar
1 tablespoon of salt
1 tablespoon of vanilla
2 eggs, slightly beaten
2 cups of oatmeal, not old fashioned (although that is what I've been using)
5 1/2 to 6 cups of all-purpose flour
2 teaspoons ground cinnamon
In a small saucepan, combine the milk and the butter. Warm, melting the butter. In a large, warm mixer bowl, combine the warm water and the yeast with a fork; set aside in a warm place to proof, until the mixture starts to bubble, abut ten minutes.
To the hot milk, add 1/4 cup of brown sugar, the salt and the vanilla. Mix. Add to the yeast water mixture, then stir in the beaten eggs and oatmeal; blend. Add half the flour and mix well. Gradually work in the rest of the flour. Knead until smooth and elastic, about five minutes. Return to a large oiled bowl. Cover and let rise until doubled in bulk, about one hour, or a bit more (This is when I put it in the fridge, covered in plastic wrap).
After the dough has risen, punch down and divide in half. On a floured board, roll out each half into a 13x8 rectangle. Combine the remaining 1/2 cup of brown sugar and the cinnamon, and sprinkle half of it on each rectangle. DO NOT BUTTER. (Avoid the temptation to put on more brown sugar, you will not be happy). Roll tightly, beginning at a short edge. Pinch the edge of the dough to seal well;, press in the ends of roll. Place loaves, seam side down in two well greased loaf pans. Brush lightly with oil. Cover and let rise in a warm place until doubled, about 40 minutes.
Preheat oven to 400 degrees. Bake loaves for 10 minutes, lower heat to 350 degrees, and bake 30 minutes longer, until deep golden brown and make a hollow sound when tapped. Immediately spread the top with a little butter. Remove from pans and let cool.
Let me know if you try this!
Posted by Jayme Goffin, The Coop Keeper at 1:56 PM

Email ThisBlogThis!Share to TwitterShare to FacebookShare to Pinterest
Labels: In the Kitchen with the Coop Keeper, That Boy Aaron