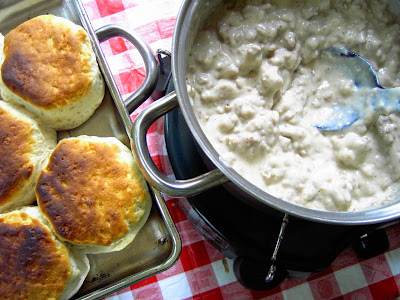 The Long Awaited Recipes......
Yes. Those are canned biscuits. Don't hate. Aaron still hasn't forgiven me. I just wanted to make it a lil'bit easier this time. The sausage gravy recipe that I'm about to share is from a book called 'Cooking From Quilt Country' by Marcia Adams. It's an Amish cookbook. Many don't know, but it was all because of the Amish that I live in the house I do. I'll have to share that story sometime.....This is my favorite gravy. I make it the day before we go camping and then just reheat it.
Sausage Gravy
1 lb sage-flavored bulk sausage, as lean as possible
2 T finely chopped onion
6 T flour
1 quart milk
1/4 t. ground nutmeg, rounded
1/2 t. poultry seasoning, rounded
Dash of Worcestershire sauce
Dash of Tabasco
Crumble the sausage into a large saucepan, and saute over medium-low heat, breaking the meat into small pieces while it cooks. Do not allow it to brown or get crisp. When meat is about three-quarters done, add the onion and cook until the onion is transparent.
Drain off all but 2 T of the meat drippings, you don't have to be too precise about this. Stir in the flour with a whisk and cook over medium low heat for six to seven minutes, or until the flour turns golden and bubbles up. Pour in the milk all at once. and add the seasonings. Cook and whisk until the mixture thickens. Place biscuit halves on each plate and top with sausage gravy. 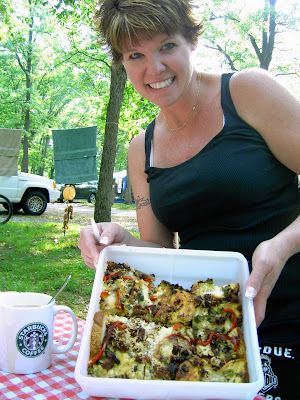 Here is the recipe for Diva Don's great Italian Breakfast Strata. It's also a cook aheader and reheat. Hey, there are better things to do whilst camping than cook!
Italian Sausage, Bell Pepper and Fontina Breakfast Strata 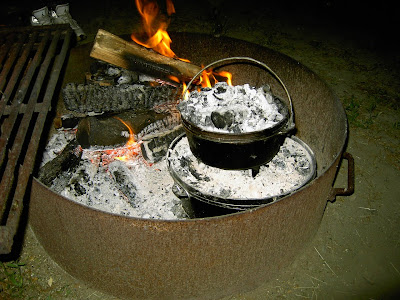 You'd think I'd have some pics of the food that actually came out of this ashpile! It looked and tasted pretty darn good. I made a chicken and rice casserole in the large dutch oven and a basic yeast bread in the small top one. It's been years since I'd seriously done any dutch oven cooking, and I felt it time to dust off ye olde pots and do it again. I'm getting into it again, and will cook in the backyard alot this summer like this. It's hot. It's dirty. Why would I do that with a perfectly good stove in an air-conditioned house? I dunno.
Here is the bread recipe that I made. I really doubted it at first, with just a quarter of a teaspoon of yeast, but it worked! It had a nice texture and taste. It has to rise for 18 hours, so plan accordingly! Please note that I did not preheat my dutch oven, nor did I let it sit for an hour after baking!

1/4 tsp active dry yeast
1 1/2 cups warm water
3 cups all-purpose flour, plus more for dusting. You may use white, whole wheat or a combination of the two.
1 1/2 tsp salt
Cornmeal or wheat bran for dusting 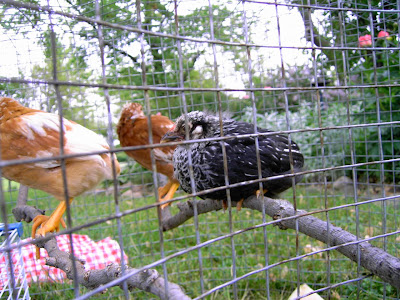 Why do I have a black chicken?? Find out, and hear all about the carnage on the next blog post from.....Tales from the Coop Keeper!!!
Posted by Jayme Goffin, The Coop Keeper at 9:04 PM

Email ThisBlogThis!Share to TwitterShare to FacebookShare to Pinterest
Labels: In the Kitchen with the Coop Keeper, Vintage Camping in the Squirrel