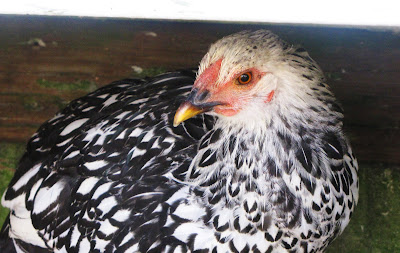 Some of you may remember poor Helen. If you are a new reader, you might want to look in the June archives and read about little Helen. She's truly a miracle bird. A coon attacked her in the middle of the night, biting her head. I do think she may be blind in one eye.
Poor little Helen is on the bottom of the pecking order. Thankfully, she's not physically picked on, but psychologically, the other girls put her through the wringer. Do you think that just once, they could let her be the first one out of the coop, or the fourth for that matter? Absolutely not. The other girls have practically broken their necks to make sure that wouldn't happen!
Unlike Mrs. Puffington and Mother Plumtree, Helen isn't much of a stitcher. She finds it a foolish waste of time. She spends most of her days in reflection and prayer. Seems to be, after the coon attack, Helen's tasted a bit of the afterlife and she aims for everyone to 'know the way'. It also could have been the fact that I did take her in a grocery store when she was ailing, and well, I didn't want to tell you this, but I did go to the meat section. I tried to shield her one good eye from the bagged chickens there, but I think she saw them. I often hear her quoting Scriptures to the other girls. Just yesterday as they were breaking up their meeting, I heard her tell Stubs 'Consider the lilies of the fields...'. I don't know about you all, but to me, a sweet meditative chicken is hard to come by.
Helen has quite a ministry actually. Last night she ventured out to the prisons. She'd die if I told you this, but her sister is actually incarcerated. She won't tell me why. It couldn't be for anything too terrible, could it? 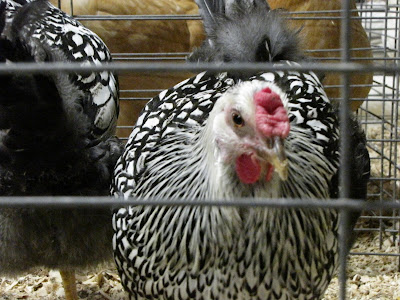 Helen told me that she had two conversions last night. She felt it a smashing success. 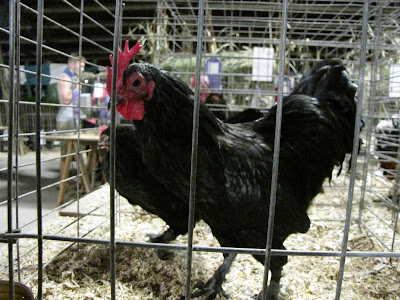 Pictured above is Harry 'The Black Spur' Australorp. He'd been wanted in these parts for years. He's a bad seed. Always looking for a fight, and one night he found one. It wasn't pretty. We don't talk of it here anymore. He's on death row. Scheduled for the deep fryer on August 30th. Helen feels she got to him just in time. 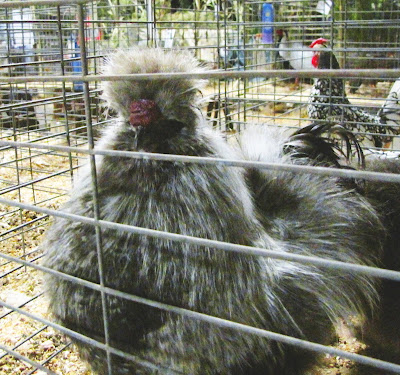 Kids these days. That's all I can say about this one. Natasha is in for a short stint due to a DUI, public indecency, and resisting arrest. Acts like she was raised in a barn. I know her parents and they are beside themselves. They gave her too much too soon if you ask me. She needs a good hard days work in the yard. If Helen can't talk some sense in her head, I don't hold out much hope for her.
Well dear readers.....you've still to meet five more hens. Are you up for it?? I'll be flying the coop for a few days. I'm leaving for Missouri this afternoon and will be back in town on Wednesday night. Tune back in for more silly stories....
Posted by Jayme Goffin, The Coop Keeper at 10:17 PM