Barbies, Sisters, and Other Feverish Musings 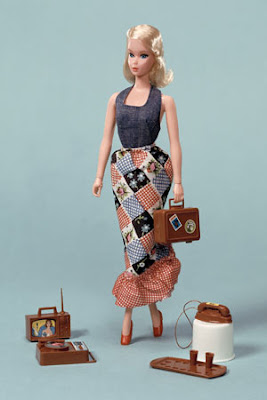 Thursday night I went to bed clearing my throat a little and thinking that I must be getting a cold. Friday morning I woke up in a pool of water with a 102 fever. I called off of work, even though I've no sick time to do it. There was absolutely no way I could even get out of bed, let alone take care of customers. I flat out didn't care if I lost my job. Calling off without accrued time is a 'no no'. Saturday morning was the same scenario. Another call off. Another 'I don't care'. I don't even remember Friday or Saturday. I remember sweating. Calling Glenco's name alot, and requesting things like pretzels, rootbeer, popsicles and canned cinnamon rolls. He obliged, he's good like that. I don't get all that crap without a lecture though. You know....you really outta be taking some vitamins and drinking juice. He sounds alot like the voice of the adults on the Peanuts cartoons.....'waa waa wa wa'. Bring on the popsicles.
I was in a fevered delirium. I wanted to know who was going to milk the cow? I haven't got a cow yet if you remember correctly! I didn't know day from night, or night from day. I remember Glenco walking in the bedroom at some point and showing me two brown eggs. The chickens have started laying! Sunday late afternoon when I finally woke up, feeling human, I double checked. Sure enough. Two pretty brown eggs. It begins.


Something that really thought about as I lie there sweating, Barbies. Barbies ring true to life. Listen to my story, and tell me what YOU think.


I'm the youngest of four girls. No brothers. My oldest sister Vivian was 14 years older than me, so she doesn't sorta count. She didn't play Barbies anyway. She just tormented us, and called us 'rat feefs' when we'd try to take the perfectly good purse out of the garbage that she'd just thrown away. We'd torment her back saying we'd light the 'stove match'. I'm laughing now, cause I don't even know what the 'stove match' was, but it made Viv mad, and that is the result we were looking for. Good times on Ewing Avenue. My poor mother.


Glenda is the next in line. She is four years my elder. Cindy, (Aaron's mom) is two years older, and then there is me. Maybe it was just our ages, maybe it was just my sisters growing out of Barbie love...but this was the scenario.


Glenda ALWAYS, and I'm not joking, made her Barbie pregnant and on welfare. She actually made little welfare checks out to Mary Scot, the name she'd given her Barbie. She dressed in the rattiest doll clothes she could find, and wore a bandana on her head. She would literally play as if she was poor, on welfare and about to deliver an illegitimate child. What in the world?


Cindy...Cindy just didn't give a hoot. Her Barbies were a tangled mess. I would sit and cry, as I hung all her doll clothes back up, organized by color or item, and rematched all of her little go go boots and shoes. How I would pray she would keep them like that! She was too much of a tomboy to really care about Barbies.

My Barbies were socialites. They held parties, and dressed fabulously. Their 'houses' were made up of what ever I could find around the house to make furniture. A checkerboard made a lovely kitchen floor. A discarded tin from the top of Hershey's cocoa made a lovely platter to serve Barbie drinks in. I would even take my dad's shaving cream and make 'pies', sprinkled with paprika for garnish, and Barbie would walk about 'serving' her guests. An old sifter made a great washing machine. I loved Barbies! The Country Camper was a dream come true.


Fast forward about 40 years. I'm not saying anything about anyone....but life has mirrored our Barbie role play. I'm not a socialite, nor do I dress fabulously....but I make a heck of a pie. I still help Cindy with her closets. Glenda hasn't had any children out of wedlock, but she has had her share of struggles. They are both two fantastic sisters though. Love them with all my heart.

Email ThisBlogThis!Share to TwitterShare to FacebookShare to Pinterest
Labels: Confessions and Musings, Friends and Family