Let Me Tell You a 'Lil Story 'bout a Man Named Schlong.... 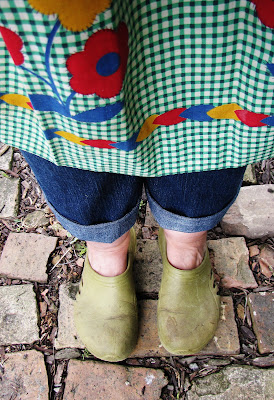 It was a muggy afternoon in the summer of 2004. I had been asked to be on the town garden walk and I was knee deep in preparation for it. I'd just returned home with a truck full of plants, and I was busying myself with unloading them.
Let me preface this by saying that we live in a semi-rural area. When we first moved out here, we were only one of two houses for about a mile stretch. Now, there is a house across the road, and one on each side of me, each about a quarter of a mile away. I'm quite used to people stopping because they've broken down or run out of gas or.....
Out of the corner of my eye I noticed a car slowing down and stopping. I didn't turn around to look, cause so often people are just using the driveway to turn around in. Next thing I hear is a door shut. 'Crap' I thought to myself. If you are in your 40's or older, perhaps you'll remember a character from 'All My Children' named Billy Clyde Tuggle. This guy looked just like him!
'Excuse me', he asked, 'can you tell me how to get to Lowell?' Being the kind, generous person I am, I put my flowers down and started giving directions, verbally and physically, arms flailing about.
'Can I borrow a tree?' he asked. I would have loved to seen the look on my face when he asked that. I didn't know what the heck he was talking about. It then dawned on me that he had to go to the bathroom. For a fleeting moment I thought of offering him the house bathroom, and realized that wasn't smart. Bewildered I replied 'ok'. He walked off through the yard and behind the chicken coop, to the back section that is now my chicken run.
I continued to unload flowers, and unload flowers. I'm thinking to myself....what the heck is this guy doing?? How long does it take to pee? 'You'd better not be pooing in my yard!' I thought. After what seemed like forever, Glen came out of the back door, walked through the yard, down the little brick sidewalk that this 'Billy Clyde Tuggle' walked down, and then Glen turned to the left. I don't know how in the world he didn't notice a strange man behind the chicken coop. That alone is enough to give ya chills isn't it?
Finally, out of the other corner of my eye :-) I notice him coming out from behind the chicken coop. It didn't take me long to realize 'it' was 'out'. IT WAS OUT YA'LL. I quickly averted my eyes back to the trunk of the car and he is standing there next to me with 'it' 'out', and talking to me saying 'Oh, sorry, I didn't know that guy was here'. I never took my eyes off of the trunk of the car, and he walked away, the whole time with 'it' 'out'.
As soon as he left, I fell down in laughter, running to go get Glenco to tell him 'omagod, Glen, Glen, Glen.....didn't you see that guy?? He forgot to put it away!' I'm laughing my head off. Glen wasn't amused, and tells me 'Jaym, you never forget to put 'it' away.'
I ran in the house and proceeded to call my cousin, and a few friends and laugh about the guy who forgot to put 'it' away in my yard.
I called my sister. "Cindy, omagod, (through laughing) this guy.....he came in the yard....he forgot to put it away." My sister didn't think it was funny at all, and scolded me telling me to call the police straightway. 'Seriously?' I replied.
I called the State Police and reported Schlong Man. The police officer was livid that I'd allow a stranger on my property, and asked me "Exactly how naive are you? He was probably casing the joint, you're lucky your husband was home." "I was born in raised in the streets of Chicago mister......" I replied. Well, obviously I hadn't learned my lesson.
I felt pretty creeped out by this time, and still get the heebie jeebies when I think of what he could have been doing behind my chicken coop, and what his ulterior motives were.
Gosh, this reminds me of the time I met ConMan at the beach................
Posted by Jayme Goffin, The Coop Keeper at 7:21 AM