Today Be the Day

T minus five hours til the root canal.
I've had two before, so I know what to expect.
I'm queasy thinking about it, but I really want to get back to my life.
I actually picked up the phone twice now to call the dentist and cancel.
Do they HAVE to use needles that resemble caulking guns?
Does it HAVE to make all those horrible sounds when they drill?
Does it HAVE to smell like something is burning?
Oh the humanity.
Despite the pain and nausea, I've accomplished a lot this week.
I've been in such a fog though, that I couldn't even think about blogging.
I began to worry that I'd never be able to blog again, like I'd lost my mojo.
I'm still a little worried about that. I hope it's just the drugs.
Saturday, in order to divert my attention to the pain, I deep cleaned the kitchen.
I actually got rid of about ten things myself!
Sunday, I cooked for what seemed to be all day. In between banging my head against the wall occasionally to alleviate pain, I made the Pioneer Woman's Cowboy Calzones, my no knead bread, a creamy and delicious Jello Mold and some chocolate cookies. I spent quite a bit of time cooking yesterday. I feel like I'm going away to have some serious surgery or something, making sure that there is plenty of food in the house, and everything is in order. I know that after the root canal today, I'll be useless.
The Cowboy Calzones were a hit with Glenco and Aaron. I never had one, since I've not really been able to chew. They were easy to make, and handy for Glen's lunches. My No Knead bread recipe remains my favorite. I even had a reader email me this week, showing me a picture of the bread she'd made. I made Ciabatta bread last week, it was this three day recipe of making a sponge, etc, etc....and I didn't like it near as well as this easy peasy recipe.
I've also been actually obsessed with my dollhouse.
I knitted on straight pins.
Read that again please.
I KNITTED ON STRAIGHT PINS.
It was incredibly hard, but once I started, I couldn't give up. I had to do it.
How cute is this?
It'll be staged in the dollhouse. I glued beads on the tops of the pins to make them look more like knitting needles. 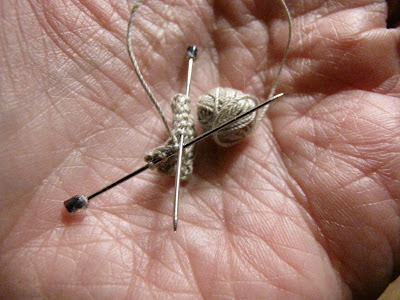 Here's a sneak peek at the kitchen so far. I'm wanting the dollhouse to have a 1920-1940 feel to it. I want it to be kinda old and run down looking. I'm embarrassed to tell you how much time I've spent on eBay lately looking at dollhouse stoves, sinks and fridges. 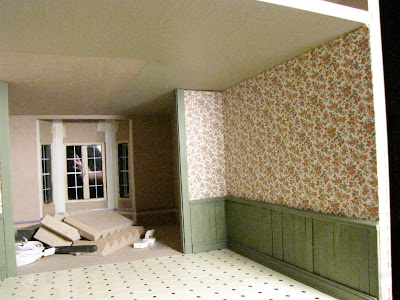 I haven't finished all the trim work yet. It's so fun, I can't even begin to tell you.
I made the wainscoting out of popsicle sticks. To buy the dollhouse wainscoting would have been over $20 for this one room. I did it for $1. 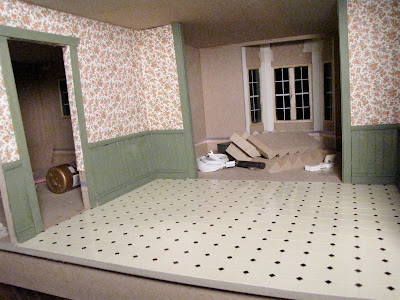 I also inventoried my spices.
I order my spices from The Spice House
Been ordering from there for years. It's SO much cheaper than buying spices at the grocery store, and they are so much fresher and potent.
If I'm not mistaken, it's where Alton Brown gets all of his spices too.
The vanilla is out of this world. I think I might start using this as cologne.
I feel like a kitchen chemist when I use it, out of this cool bottle. 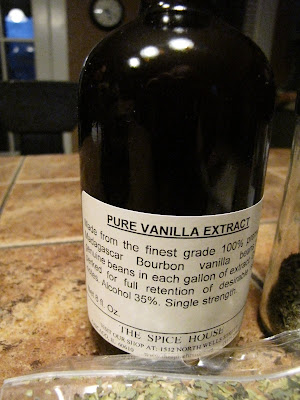 You can order the spices several ways. In the jar, filled, or you can order little jar refill packs, or just order it by the ounce or half cup.
My initial order was all in jars, and that way, I just order refills now. 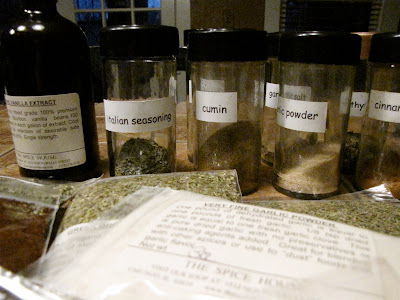 For example, the Mediterranean Oregano that I ordered was enough to refill my jar two times, and it cost $2.09. It smells incredible, and seems so fresh, compared to McCormicks, or other spice brands.
The cinnamon.....oh just wait to you smell the cinnamon. 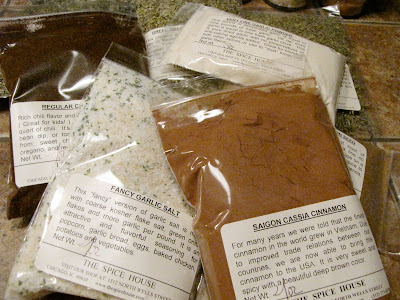 All the girls are fine, and quite productive right now.
Quiche anyone? 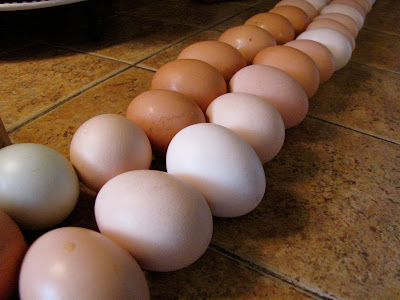 Speaking of saving money on spices, etc.....you know that last trip I made to the grocery store? I spent about $122? That was two weeks ago today.
Guess what?
I haven't gone back other than for milk and a few fresh veggies and fruit.
Spent another $40.
So far for the last two weeks, I've spent $162.
Well friends, that's all I've got for right now.
Thanks for hanging in there with me this week.
I hope after today I'll be back to myself again, and blogging about something worthwhile, like Chicken Butts or Cleaning Schedules!
I seriously can feel your thoughts and prayers.
I'm not nearly as freaked out by the dentist today as usual.
Posted by Jayme Goffin, The Coop Keeper at 10:26 AM

Email ThisBlogThis!Share to TwitterShare to FacebookShare to Pinterest
Labels: Confessions and Musings, Dollhouse, In the Kitchen with the Coop Keeper