Diary of a Mad White Woman

Hello.
My name is Jayme.
I blog here.
Miss me? 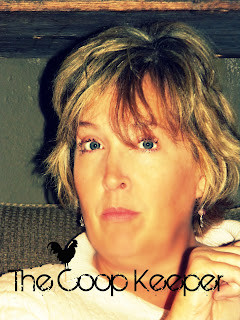 Lord have mercy.
It's becoming harder and harder to blog without my camera.
I get it back on Wednesday.
I promise.
Friday morning - I woke up feeling off - tired - sore.
Seems that it took me half the day to get me chores done.
When Glenny got home from work - we took off to get all the vittles for our 'Oktoberfest' celebration that we were going to have the following night.
Right before we left - I became unwell. 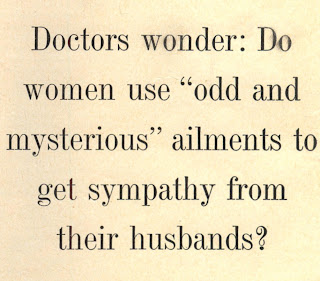 Let me explain 'unwell'.
It happens to us womenfolk once a month.
It's what my aunts and mom called it.
The same wonderful women that brought us 'aye law'.
According to my ancestors - a woman is not to cook, bathe or do anything when she is unwell.
They believed they could die if they washed their hair, and if they cooked, it would spoil.
By the time we got to the grocery store - I was - well - um....not in a good mood.  Ya, that's it.  I wasn't in a good mood.  If there's one thing I've learned whilst being unwell, in a bad mood - keep yer yap shut.  Tight.  I don't feel that hormones are an excuse for bad behavior, so I keep my yap shut.
Or I try too.
Glenco loves, and I mean loves to torture me when he knows I'm like this.
In fact - I think he tries to get me to lose it.
We had a big discourse in the grocery store about sausages.
He was adamant that there couldn't be an Oktoberfest celebration without bratwurst.
I tried calmly explaining to him that indeed, we could have an Octoberfest without bratwurst, and we were indeed not going to have bratwurst.
My jaw was aching at this point. 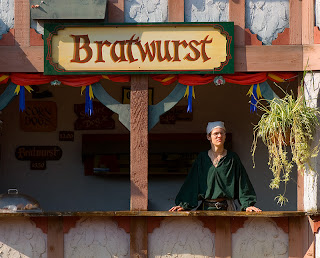 We went to every local library in Lake County Indiana to find a German Folk Music CD.
Glenny felt the need to talk loudly in the library, and sing a little song that he's just made up that was sung to the tune of 'Love Machine', but he'd changed to the words to "Washing Machine".  I could see the look of sheer delight on his face as he knew he was not only embarrassing me, but that my dam of restraint was about to break.  The library is a holy place.  You just don't mess in the library.  You don't.
HelpmeJesus.
It took me a good three hours to return to my sunny self.
Saturday morning we awoke to chicken carnage. 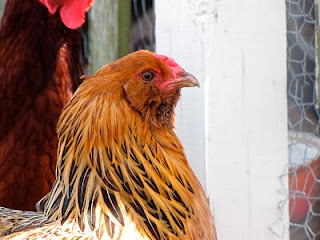 Fifi is gone ya'll.
Gone.
I'm so sad - she was one of my first girls.
She survived the first raccoon attack - only to be killed by one a year and a half later.
God rest her sweet soul.
My favorite banty rooster was taken, as well as a young poult that had no name.
It's a long story as to why these birds in particular were vulnerable.
I'm not kidding when I say that all the birds were quiet yesterday.  There was no clucking and cackling as usual.
Our Oktoberfest was a smashing success, even without bratwurst.
A new obsession:
German desserts.
I'm still not on the computer much - and I really have to say, I'm not missing it all that much.﻿
I really do plan on continuing to blog -
no despair necessary.
Posted by Jayme Goffin, The Coop Keeper at 8:32 PM