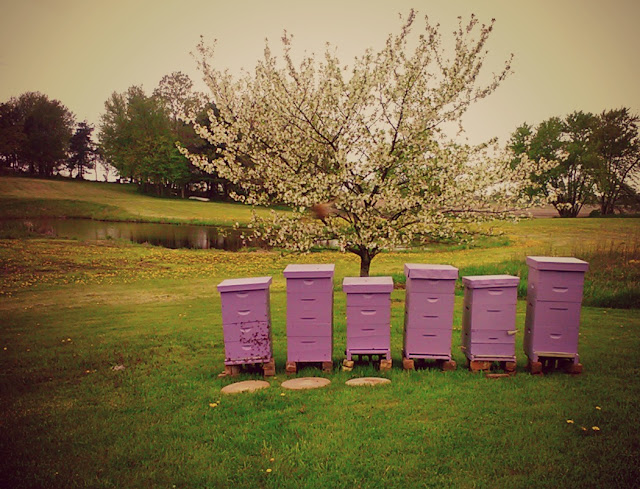 Here's a tale about the beehives that involves no nudity.
A family friendly story if you will.
Sorry to disappoint!

Well, here they are - the beehives.  Painted lilac, all lined up in a very unlevel row.
It is what it is.
I was going to put those stones in front of the hives, for really no reason, since I don't stand on them - but I've decided against it, and have removed them - it would be a mowing nightmare.

As soon as we got the beehives moved a couple of weeks ago - the enormous fiasco that it was, I realized that I didn't like them where I'd put them.
Stubbs even called it a Fuster Cluck.
True story.

But what's a girl to do?
She drags her poor husband out on a dusky, rainy night - he endures a hellacious beehive move because his wife is undiagnosed bi-polar - and a week later she wants them moved again? 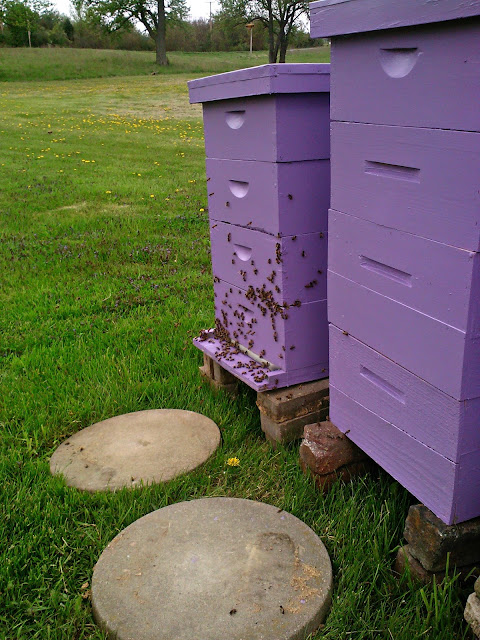 She did what any loving, intelligent wife would do - she didn't tell him.
I went to Lowe's - probably my favorite store eva - and picked up this 'Purple Hill' paint.
I'm a sucker for lilac.
I had a couple of empty hives - such as this one on the right - it has no bottom board yet, since it's empty - I just bought a new one, and have to paint it.

I started painting the hives late one morning last week - and as I would get them painted, I would move the empty ones over to the new area - which is almost exactly where they were before - another reason - we aren't telling Glenco.

Now, to appreciate them now - you must look back on how they were before....
Here's when I had two... 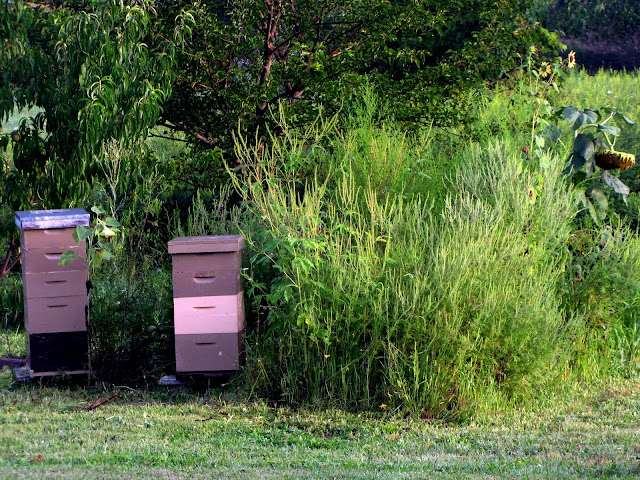 They look purplish in the above photo, but they are not...they are brownish, as you can see in this photo below... 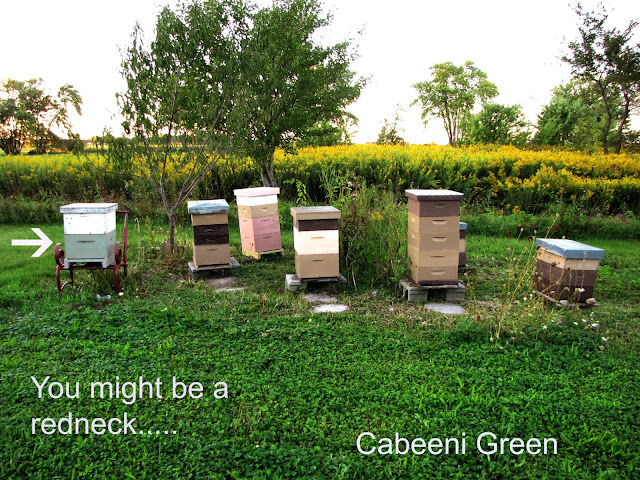 My hillbilly bee yard.  Mercy - that was an embarrassment!
It's called - the bees are swarming - quick!  Get them in a box.

So.....here I am, out back, painting beehives a lovely lilac - and Glenco arrives home from work.
I didn't know if we were going to have a confrontation or not - I mean, a man can only take so much.
Move the beehives AGAIN?
You bought paint when we have about 28 gallons down in the basement?

So, he meanders in the back and says - 'oh, that is a really pretty color' - and then he sees where I'm moving them, and says 'oh, ya - that's way better'.
Whew!  Dodged a bullet there.

He willingly helped me move the hives the next day, and it went off without a hitch, since we actually did it the right way.  No flailing, no stinging, no drama.

I now feel like my bees are organized, and that makes a happy CoopKeeper.
I have to interject something here....

Is this what I ULTIMATELY wanted?  No - not really.
I would have loved to make awesome hives like this...

Friends - it's not in the cards for me.
Numero uno - these hives are $400 a pop from Williams and Sonoma.
Second - I have no wood shop, nor the time or money to set one up and start making hives - even as much as I would like to.
I am seriously going to have to live to be 100 if I'm to accomplish half of what I'd like to.

So - the beehives are lilac, in a charming little crooked row, and they have been inspected and the gals are happy, healthy and bursting with busyness.  We pulled six gallons of surplus honey off of the hives.
Many beekeepers will pull what I think is too much honey off of the hives in the fall, and then have to supplement feed the bees with sugar, or these fondant patties.  T'aint natural if you ask me.
I leave them more than enough, and take it in the Spring if there is a surplus.

We sold quite a bit by word of mouth - but still had a lot left over, so Glenco made this sign for me.... 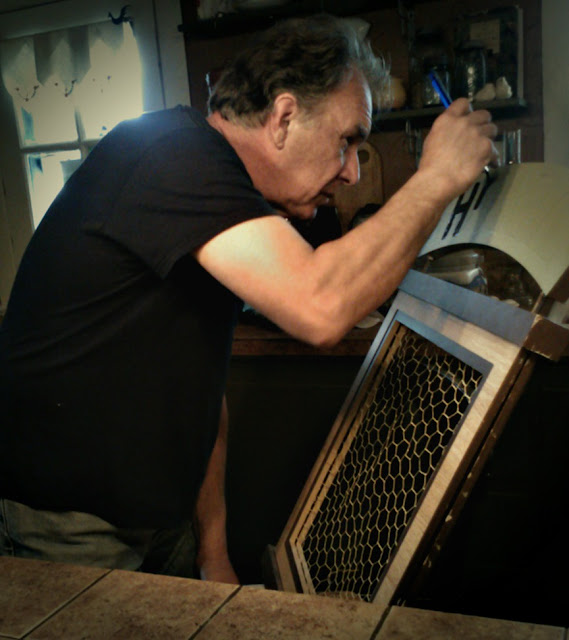 Isn't it adorable?
I want to plant some flowers around it.
We have sold 10 quarts and a pint in a couple of days since the sign went up!
I just have to remember to be dressed.
The first customer caught me in my 'loungewear'. 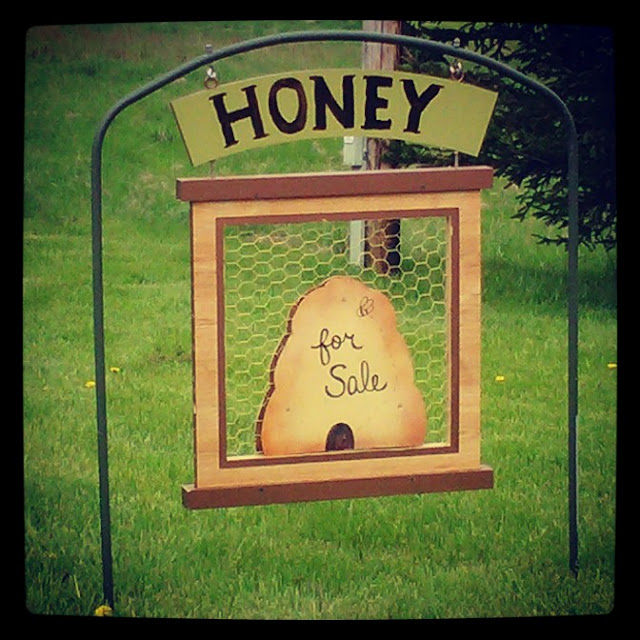 I really do enjoy beekeeping - even though I've been stung more times than I can count this Spring.  I think it was some rite of passage the bees were putting me through.  Truth be told - 99% of the stings were really my fault - just not being careful, or being in too much of a rush.

One bit of advice, if a bee ever gets tangled in your hair - do not, in any circumstance, bend over at the waist - and flail your head wildly while running your hands through your hair...
well, unless you like the feeling of a flaming hammer coming down on your head. 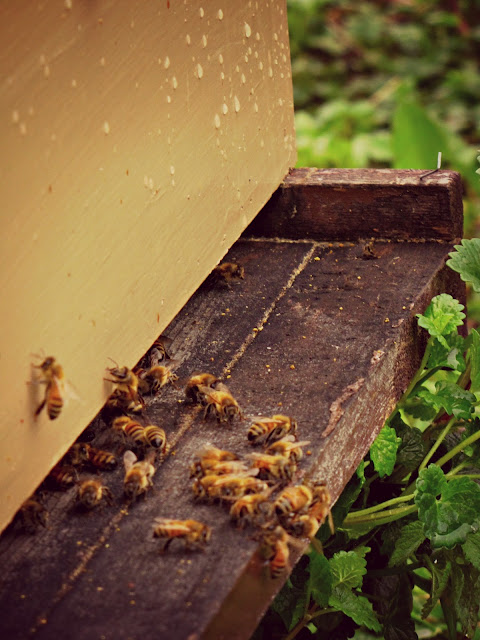 The bees continue to fascinate me, teach me, scare me, entertain me and keep me busy.
I'd say they're keepers.

Posted by Jayme Goffin, The Coop Keeper at 5:45 AM