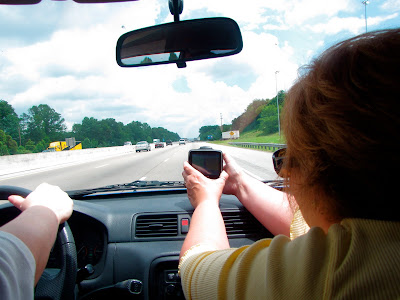 Can I just say how much I love my GPS? It's made my life delightful.
I depend on it totally, which I know is wrong - but just let me enjoy the honeymoon.
It hasn't failed me yet, and if I'd listened to it on Monday, I wouldn't have ended up in Michigan accidentally.
More on that later. 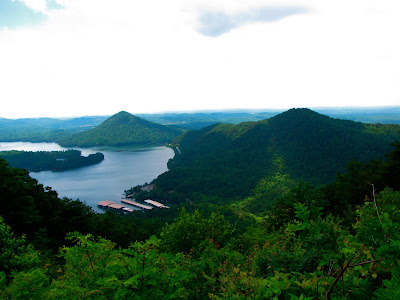 I felt that our trip to Tennessee was a pilgrimage in a way.
About a month ago, I woke up thinking of all my family members in the South that I hadn't seen since 1978. I felt we needed to go. I called my sister and she said at that very moment she was thinking the same thing. 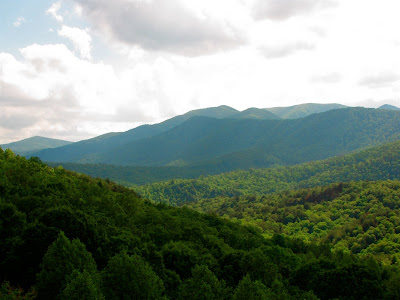 We were visiting my father's side of the family. He was born in Murphy, North Carolina. My mom was born in Cosby, Tennessee. I loved going back to where they were from. 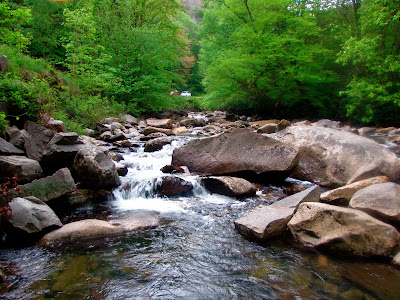 Tennessee is BEAUTIFUL.
North Carolina is FABULOUS.
I miss the mountains.
Indiana seemed exceedingly flat and boring on the way home.
One of my very favorite moments of the trip was when Aaron, standing in my Aunt's house said "I never realized my family was so big, I feel like I'm home"
It was a pilgrimage for him, too. 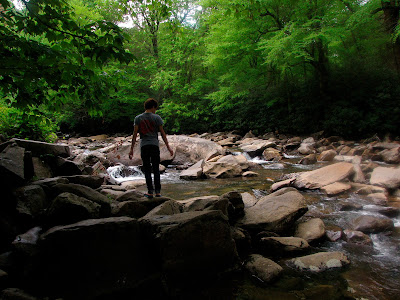 We spent a day in Pigeon Forge and Gatlinburg.
I liked Gatlinburg much more than Pigeon Forge.
All that touristy stuff just isn't up my alley.
I'm more drawn to the landscapes, the old farms, the quiet trails.
Where the only thing you shop for is serenity, and the night life is fireflies. 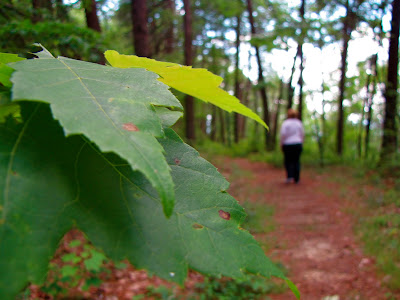 Aaron got to see the dams that his great grandfather helped to build. 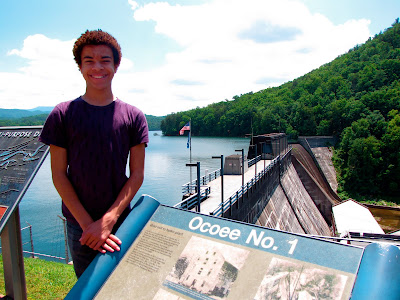 Above all, this trip was about family. 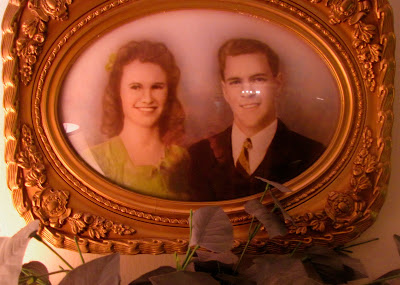 I felt a little nervous, considering I'd not seen most of my father's side of the family since 1983, and some as early as 1969.
Would it feel like visiting strangers?
Does she look like she'd be a stranger to anyone?
My sweet Aunt Mae. 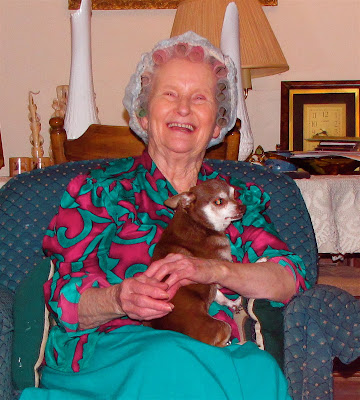 She would have a fit if she knew this picture was on the World Wide Web, but I couldn't help but to share it. It's priceless!
Her home was filled with memories of a long, happy life.
She said, "Gary (her son) keeps telling me I need to get rid of half this stuff, but I just don't know which half to get rid of.".
The entire family was so welcoming and accommodating.
If you are reading this - thank you! 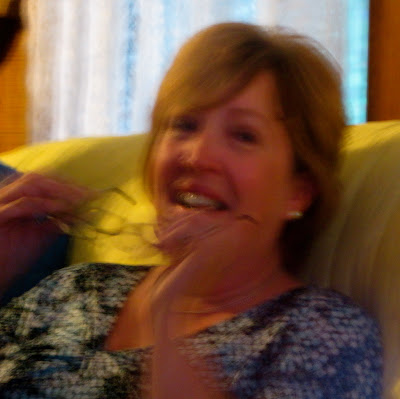 Most of the time was spent laughing until we cried. 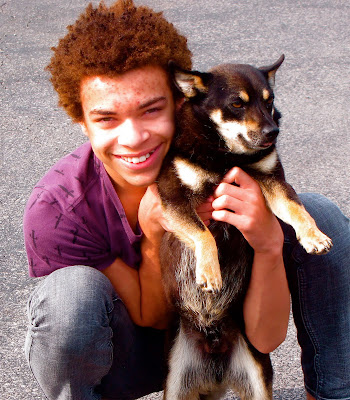 Aaron fell in love with my cousin Vickie's dog, Buddy.
We plan on returning in October.
Life is too short to let so much time go between visits.
I returned home on Thursday night.
I was still sick. I was sick when I left with an upper respiratory infection.
I had no voice for two days while I was there.
Me without a voice, is kinda like Dolly Parton without a wig.
It just don't happen.
It was good to see everyone when I got home.
My bees were quite busy. 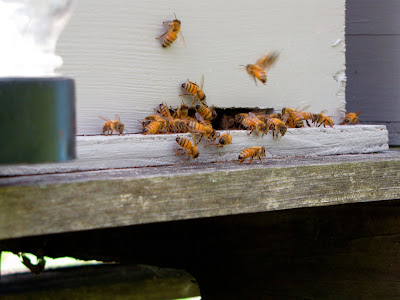 Claudanne learned to fly whilst I was away.
She flies out of her pen everyday now and follows me around the yard.
She dabbles my feet and legs.
I love her to bits.
Isn't she gorgeous?
Maude hasn't taken to flying yet. 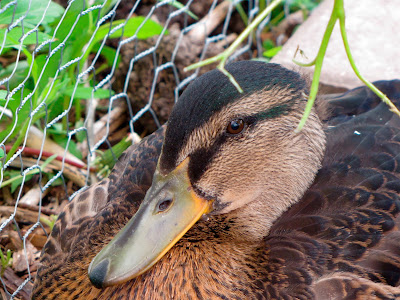 My chicken birds still delight me to no end. 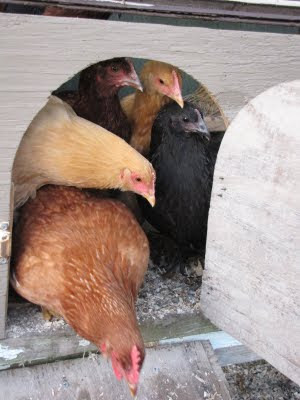 The new banty hen, Phyllis, has become my dearest friend.
I've separated her from her babies, I'm not really sure why, but she's a much happier hen now. She is seriously a walking yard ornament.
I adore this bird. Adore, I tell you! 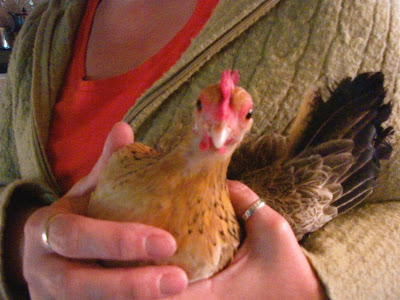 Now, let's talk about what I brought home with me from Tennessee.
I warned you. 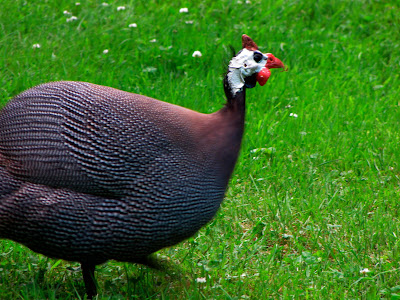 I've really been hankering for some guineas.
My aunt had one walking around her yard, and I just had to have it.
My cousin brought me to a lady he knew that raised chickens, quail, guineas, turkeys, etc.
She really liked my purse, by the way.
So, I bought two turkey babies, two polish chicken babies, and then a guinea from another man that we found. Her guineas were all spoken for.
I was on a guinea quest.
I carried the one baby guinea in my bra for two days. I really wish I was joking about this, but I'm not. It was all alone, it didn't seem like it felt well.
When I called Glen on the way home, he heard the baby chickens and turkeys and inquired about them.
"I hope you have a plan" were his words.
"Oh, yea, yea, I have a plan, " I replied.
I had no plan.
Not even a clue.
Where would I put the turkeys and guineas??
Friday morning, I woke up here at home, relapsed - sick.
Exhausted.
Overwhelmed.
There were weeds everywhere.
Boxes of baby chickens everywhere.
(Remember the four I bought BEFORE going to Tennessee?)
I just had me a mini-meltdown.
I made a decision, and called my neighbor up the hill that is more set up for large amounts of poultry. She came and got four chickens (the new black ones) and the turkeys.
Talk about breaking my heart.
I feel better now though, more under control.
I can get more - later - when I'm ready right?
I've GOT to stop putting the cart before the horse.
That brings me to Michigan.
On the way from LaPorte, Indiana, where I found a man selling guineas (I got six more, that makes seven guineas in case you've lost count), I pushed 'navigate home' in the GPS.
In my defense, I was talking to my friend, and it was raining - but the next thing I saw was:
Welcome to Michigan.
I don't live in Michigan.
Let's change the subject.
The garden is looking lovely.
It's where I'm at if I'm not sleeping, homeschooling, eating or going to the bathroom. 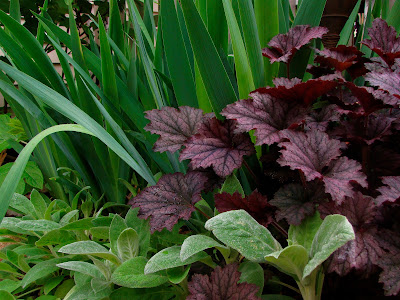 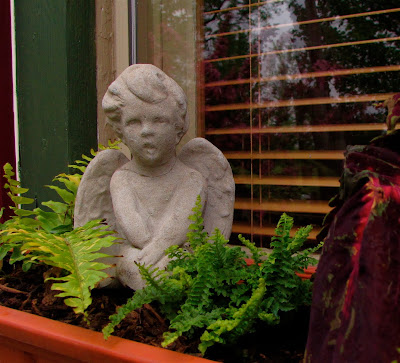 The strawberries are coming in now. 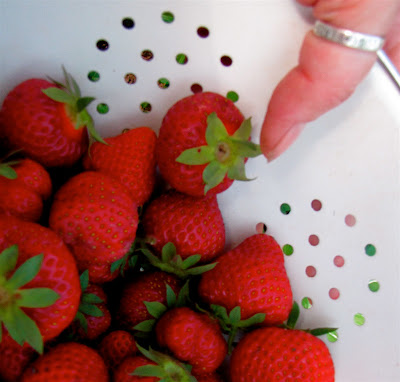 Aaron is sick with swimmer's ear in BOTH ears.
He gets this every year when the pool first opens.
Poor little dude. 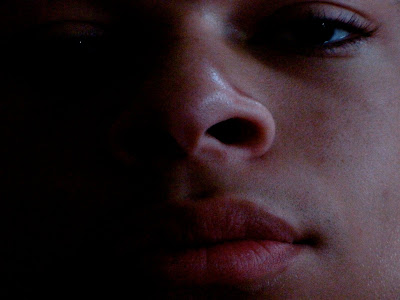 I snapped this picture this morning - things are filling in nicely. This week is 'do or die' I have to get everything planted, seeds, etc. Then it's just a matter of keeping it weeded, watered and fertilized. I should have plenty of time to spruce some things up as well. I'm really not that stressed about it. Ask me if I am next week, if I don't finish what needs to be done this week! 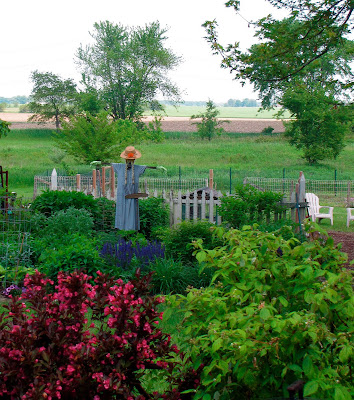 And last, but not in the least, least - my niece Miranda and sis-in-law Sherie stopped by for a visit on Sunday.
Miranda drew this for me - said it was me.
How cute is that?
I'll save it til the day I die. 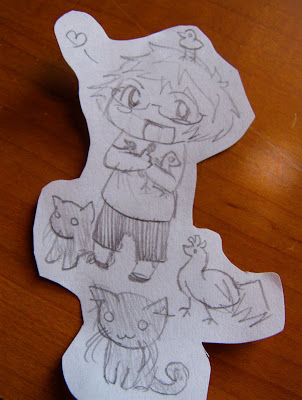 Posted by Jayme Goffin, The Coop Keeper at 4:30 PM

Email ThisBlogThis!Share to TwitterShare to FacebookShare to Pinterest
Labels: Beekeeping with the Coopkeeper, Maud and ClauDanne, My Fabulous Chickens, On the Road with the Coop Keeper, That Boy Aaron